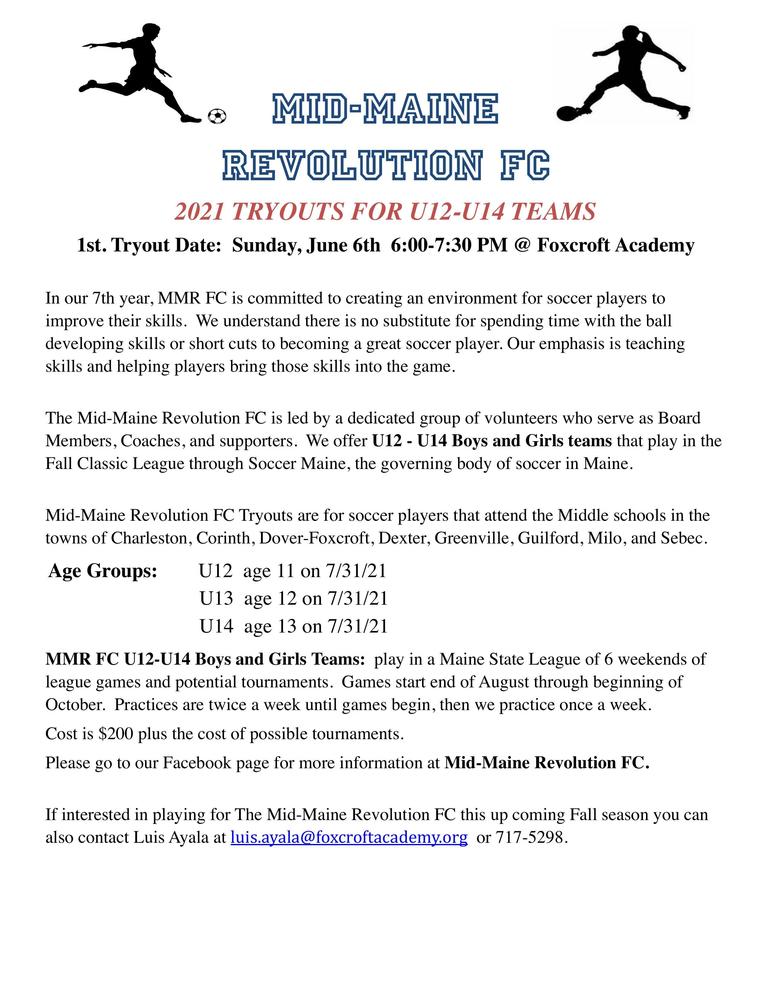 In our 7th year, MMR FC is committed to creating an environment for soccer players to improve their skills. We understand there is no substitute for spending time with the ball developing skills or short cuts to becoming a great soccer player. Our emphasis is teaching skills and helping players bring those skills into the game. The Mid-Maine Revolution FC is led by a dedicated group of volunteers who serve as Board Members, Coaches, and supporters. We offer U12 - U14 Boys and Girls teams that play in the Fall Classic League through Soccer Maine, the governing body of soccer in Maine. Mid-Maine Revolution FC Tryouts are for soccer players that attend the Middle schools in the towns of Charleston, Corinth, Dover-Foxcroft, Dexter, Greenville, Guilford, Milo, and Sebec. MMR FC U12-U14 Boys and Girls Teams: play in a Maine State League of 6 weekends of league games and potential tournaments. Games start end of August through beginning of October. Practices are twice a week until games begin, then we practice once a week. Cost is $200 plus the cost of possible tournaments. Please go to our Facebook page for more information at Mid-Maine Revolution FC. If interested in playing for The Mid-Maine Revolution FC this up coming Fall season you can also contact Luis Ayala at luis.ayala@foxcroftacademy.org or 717-5298. Age Groups: U12 age 11 on 7/31/21 U13 age 12 on 7/31/21 U14 age 13 on 7/31/21